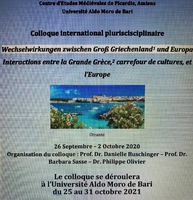 Studies in Honor of Roy Rosenstein

For this collection to honor Roy Rosenstein, the editors welcome essays by comparatists, language and literature scholars, and historians - including of the fine arts and music - relating to the four thousand years that have defined the teaching and scholarship of our American colleague.

"There is no better way to know an object than to compare it to its opposite: nothing makes light more attractive than the hatred of darkness" (Petrarch, On His Own Ignorance and That of Many Others). Roy has taught at The American University of Paris (AUP) since 1977. A devout comparatist, he co-founded the degree program at AUP and served as first chairman of the Department of Comparative Literature. During his tenure, CL has developed into one of AUP's biggest and best degree programs.

As Roy likes to recall, his career long predates his arrival at AUP. A teacher's pet who took over classes from fourth-grade English to high-school French, Roy took up a first paid assignment in May 1968: Columbia University was on strike, interrupting his studies there. Roy began by teaching English and Spanish in a small language school. He also worked for a rare book dealer in the afternoon, between teaching his morning and evening courses. A natural in the classroom, he continued to work as teacher and bookman when Columbia reopened. That semester he first heard about AUP, from linguistics classmate Steve Plummer, who had returned to Paris as AUP's first Dean of Students by the time Roy arrived there.

Other appointments have taken Roy to campuses around the world: Exchange Fellow at the École Normale, Mellon Fellow at Rochester, Visiting Professor at Oregon, Senior Fulbright Scholar in Brazil. In addition to Columbia, he taught at CUNY in New York and at the American College in Athens. All told, he has lectured on fifty campuses from Australia to Zimbabwe, from Turin to Toronto. But each year he returns to his first love, comparative literature at The American University of Paris. 2

Since his dissertation on classical Latin, medieval Latin, and the vernacular, Roy has followed the classical tradition in studies on Sinuhe, Proverbs, Plato, Aristophanes, Ovid, Apuleius, and Polydore Vergil. In medieval literature, he has published on epic, lyric, and narrative texts in French (Eulalie, Song of Roland, Tristan, Chretien, trouvères), English (Malory), Hebrew (Juda Halevi), Italian (Dante), Occitan (troubadours), Portuguese (Galician-Portuguese poetry), and Spanish (Libro de buen amor, Celestina). His edition of Jaufre Rudel in 1983 was one of the first to appear in the Garland Library of Medieval Literature. More recently, in 2011, with a new edition long on the CAPES Occitan reading list, he launched the Collection Troubadours with French publisher Federop. That series grows at the rate of one new title each year. Meanwhile, a revised version of the 1983 full critical edition is scheduled to appear online.

Those who see Roy as medievalist are unaware he is as active in his other major field, Renaissance studies. Along with an edition of French baroque poet Etienne Durand in the TLF series for Droz in Geneva, he has published on Marguerite de Navarre, Montaigne, Rabelais, Ronsard, and Tabourot des Accords. Nor does he neglect other early modern literatures, having written on Portugal's Camões, on Spaniards Cristóbal de Castillejo and Cervantes, and on Italians Petrarch and Boccaccio, but also on Italy's fourth crown, Serafino Aquilano, Roy's subject of study during a stay at Harvard's I Tatti.

Along with his work on baroque lyric, Roy's attention to the seventeenth century is seen in his articles on Shakespeare. He contributed book chapters on Sir Thomas Browne to Oxford UP and on Tommaso Campanella to Cambridge Scholars. The eighteenth century is represented with scholarship on Boswell and Burns. As G. Ross Roy Fellow, he developed Burns material now in a chapter in a European Literary History textbook with Routledge. For the nineteenth century, besides an article on Scotsman Andrew Lang and essays on Americans Poe and Twain, Roy has written on Dostoevsky in linking him to twentieth-century Japanese novelist Kobo Abe, who has close ties also to Kafka, Sartre, and Beckett, all of whom Roy periodically teaches.

For his own century, the twentieth, Roy has penned notes on various figures, American (Kay Boyle, Carson McCullers, Nordhoff and Hall, Irwin Shaw, Richard Wright), Canadian (Mavis Gallant), Brazilian (Clarice Lispector and popular cordel literature), British (Helen Waddell, Arthur Koestler), French (Vercors), Italian (Silone, Calvino), Occitan (Cordas), Russian (Gorky), and Latin American. This last group includes personal favorite Borges, the subject of several full-length essays, but also less studied figures like Salomón de la Selva. Roy has published on Resistance literature in Journal of the History of Ideas and elsewhere and is at work with his students on a monograph on the denazification of Heidelberg, focusing on six key players from both sides of the table. This project recently took Roy and his students to the Library of Congress on a research residency grant.

To date, Roy's forays into the twenty-first century are few. The century is young and is a field mined by his dynamic junior colleagues. He wrote about contemporary composer Kaija Saariaho years in advance of her receiving an honorary doctorate from AUP. In addition, Roy has published some translations and is included in three Norton anthologies. He has also penned several essays on translation, linguistics, and pedagogy, including one about teaching Dante on 9/11. 3

As these examples show, Roy Rosenstein's sustained commitment to his students and his discipline defines his activity over five decades. The span of his publications is explained by his training as a comparatist and is driven by the diversity of his students and their interests on that most international campus which is AUP: over one hundred nationalities are represented, sometimes a dozen languages in a class. As ever, his classroom is an incubator for the comparative scholarship which he and several generations of his students practice.

Roy was privileged to be a recipient of the Henry Alfred Todd Fellowship, honoring the founder of the Romanic Review and the first American to edit an Old French text. Roy's dissertation was awarded the Justin O'Brien Prize. His research has been sponsored by the French government, the Whiting Foundation, the Camargo Foundation, the Mellon Foundation, the National Endowment for the Humanities, the American Council of Learned Societies, Fordham, NYU, SUNY, UCLA, and other institutions and libraries. He serves on the editorial board of journals in France and in Brazil. Roy received AUP's Distinguished Teacher Award in 2001. In 2012, he was raised to the rank of Chevalier des Arts et des Lettres by Frédéric Mitterrand, French Minister of Culture, for the sum of his published work.

We conclude as we began, with Petrarch, citing Aristotle's Metaphysics: "The ability to teach is a sign of knowledge." Roy might more modestly have chosen as his devise Chaucer's portrait of the Oxford clerk in the Clerk's General Prologue to the Canterbury Tales: "And gladly wolde he lerne, and gladly teche."

We invite colleagues from around the world to propose contributions as diverse as Roy's interests, spanning Sinuhe (ca. 2000 B.C.) to Saariaho (b. 1952). Please send proposals to Danielle Buschinger (dbuschinger@gmail.com), Anne Ibos-Augé (anne.ibosauge@)orange.fr) and Martine Marzloff (m.marzloff@free.fr) at your earliest convenience. Contributions, to be formatted in close conformity with the publisher's guidelines, are due by August 2020. The volume will be published by the Centre d'études médiévales (Amiens) as volume 70 in its Médiévales series. The co-editors would be grateful for your reply with an expression of interest and a tentative title as soon as possible.

Studies in Honor of Roy Rosenstein 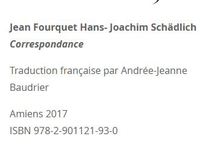 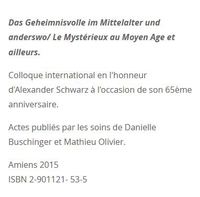